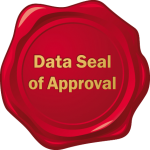 You may have been redirected to this page from www.datasealofapproval.org. This is because the Data Seal of Approval (DSA) has been replaced by the CoreTrustSeal, and the DSA site and associated certification tool have been discontinued. This page has been created to preserve the information collected under the DSA organization.

The Data Seal of Approval was developed in 2008 by DANS (Data Archiving and Networked Services) in response to the requirement from their funders, the two Dutch science organizations KNAW and NWO, to create a seal of approval for data that helps ensure archived data can still be found, understood, and used in the future. In the first quarter of 2009, the Data Seal of Approval was handed over to an international board.

During its lifespan, three versions of the DSA requirements were produced for assessing the trustworthiness of digital repositories (2010, 2014–2017, and 2017–2019).

Data repositories awarded the DSA seal for the period 2014–2017 will need to renew their Trustworthy Data Repository certification following the CoreTrustSeal Requirements.

In the DSA spirit of reusability and sustainability, a dataset has been created that amongst others, contains a database of all the awarded Data Seals of Approval, including the repositories self-assessment statements and reviewer comments. See: https://doi.org/10.17026/dans-28z-njxq.